The Catholic Standard and Times reported on the elaborate October 22, 1916 ceremony for the “Christening” of our St. Francis de Sales Church tower bells named Adolph, Michael, Elizabeth, Anthony, Cecilia, Theresa, Edmond, John, Thomas, Maurice and Gervase, noting: “after each bell had been blessed it was rung by the Rev. Maurice F. Cowl…” Did Reverend Cowl register a special sense of Catholic belonging when his own named bell rang out?

The story of the bell named Maurice is a complicated Philadelphia tale, starting, surprisingly, with the  Episcopal Church – which has always had to balance tensions between those who favor a “High Church” (run by clergy with a focus on sense-oriented Catholic-style “smells and bells” incense and ritual), versus “Low Church” (with more lay administration and a more pared-down Calvinist Protestant austerity), with many gradations in between.

In the ornate late Victorian era, the more intricate “High Church” tendencies prevailed; as the century changed, the balance suddenly shifted in the opposite direction, leaving some Episcopalians behind – something like the changes in the Catholic Church, decades later, with the New Mass and Vatican II.

A rift occurred right here in Philadelphia, with “The Open Pulpit Controversy.” Simply put, compromises were made in order to move closer to other Protestant denominations, and Episcopal bishops agreed that a minister’s education and training would no longer be required in order to teach from the pulpit; any Christian man could be allowed to speak. Those with “High Church” leanings felt that inviting unqualified people to preach could open the Episcopal church to heresy. They were overruled. It was the “last straw” for some of those who wanted to keep a complex ceremony with a strong clerical structure. In 1908, a group of seven local Episcopal priests officially resigned and entered the Catholic seminary under Bishop Ryan. Reverend Maurice Cowl was among them. He was ordained as a Catholic priest on December 17, 1910.

Reverend Cowl assisted at our parish from 1910 to 1917. Our new church, with its symbol-rich medieval-guild-style stained glass, hand-carved statues, and hand-set mosaics, likely appealed to his sense of mystery and ritual, and he became “Master of Ceremonies” for various parish events. He may have had an authoritarian streak: the 1940 Parish Jubilee Book reports that “In December 1916, Reverend Maurice Cowl decided that the time was opportune to form an organization for the boys of the parish…It was decided to form a strictly military organization, to be called the “St. Francis de Sales Boys’ Battalion…” He kept busy: while Reverend Cowl assisted at de Sales, starting in January 1911, he was appointed Chaplain of St. Leonard’s Academy for girls at 38th and Chestnut (today St. Leonard’s Court at Penn), which would have given him some good walking exercise through the neighborhood!

Reverend Cowl went on to become the founding Pastor of Saint Laurence Church on Westchester Pike in Highland Park/Upper Darby, and the St. Francis de Sales Choir traveled to sing at the first Mass there on June 17. 1917. He retired, due to ill-health, in 1932, died at Misericordia Hospital in 1934, and is buried on the St. Laurence Church lawn, at the foot of a statue of the Sacred Heart. Several other de Sales priests have since gone on to serve at that church, including our eighth Pastor, Monsignor Francis Fitzmaurice. 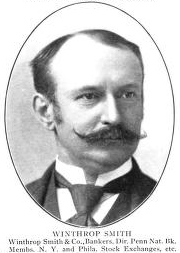 Why was it scandalous and what did it have to do with St. Francis de Sales Church?

Smith was a well-connected Philadelphia financier and member of the Union League, who, since his wife’s death

in 1911, had been living locally at the Covington Apartments. Miss Margaret McMenamin, of 4303 Baltimore Avenue, was reportedly 33 years old.  Their marriage was described as “culminating a friendship which originated in his office” – the banking firm of Winthrop Smith & Co. — from which he had retired  in 1912, and where he was fondly remembered for once asking famous magician Harry Kellar, a bank customer, to entertain the staff.

They were married quietly, on a weekday,  at St. Francis de Sales. The Latin in the parish registry (coram me inierunt in matr.) translates “in my presence have entered into matrimony” – an unusual passive phrasing probably signifying a marriage in which one partner was not  Catholic — and no witnesses are listed, which is also odd. Reverend Maurice Cowl, a former Episcopalian priest, recently converted to Catholicism and assisting at de Sales, officiated. The Inquirer reported that after the ceremony, the couple left directly for New York, and a ship to Europe. The bride’s sister tersely commented that “they are married and that settles it.” His relatives remained silent.

When the couple returned from Europe, they settled at Smith’s estate in Glenside and St. Francis de Sales passes out of the story. Their daughter, Margaret, born around 1916, was introduced to society as a debutante in 1935. In 1942, she married Lt. Cmmdr. Charles T. Monk USNR (whose family lived, for a time, at 4402 Locust Street); he became an insurance executive after the war.

Winthrop Smith died at age 92 and is buried in their family plot at The Woodlands (40th and Woodland). A tall, proud obelisk, near the old stable, memorializes his father, another Winthrop Smith, publisher of the celebrated McGuffey Readers, on the front. Our Winthrop Smith is listed on the back, with his first wife, Florence Chapman Smith. The large square plot is full of Smiths. Lieutenant Cmmdr Monk is also buried there. But where are the two Margarets?

A mossy gravestone labeled “Winthrop Smith” in the family plot has no dates, and a space for a second name is left uncarved. Was that our Winthrop, forever waiting for his second wife? A fire at the Glenside home in 1946 is the final mention of Margaret Smith in the newspapers. The estate of her childless daughter, Margaret Monk, was auctioned in 1984. Today, the name Winthrop Smith continues only in a separate Connecticut branch of the family, associated with the firm of Merrill Lynch.

Winthrop Smith obelisk at The Woodlands