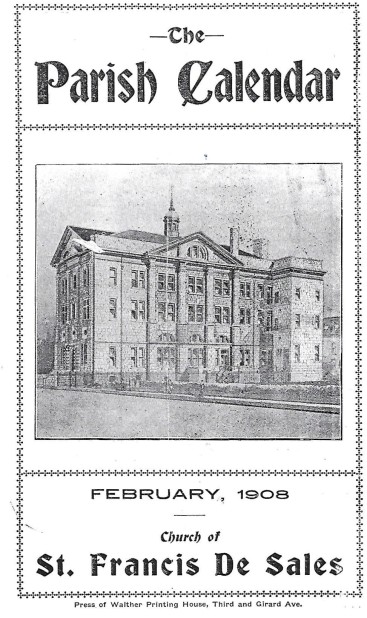 The earliest (lonely) issue of a St. Francis de Sales Church bulletin in the Philadelphia archdiocesan archives is a single copy dated February, 1908 – four months after the cornerstone was laid for the present church (see the original chapel — the building housing today’s school auditorium — on the cover!). Regular publication didn’t begin until mid-1924. Now step into the time machine, and enjoy an excerpt from that first bulletin: a little moral tale filled with tiny details of life in 1908:

“Yesterday he wore a rose on the lapel of his coat, and when the plate was passed he gave a nickel to the Lord. He had several bills in his pocket and sundry change, perhaps a dollar’s worth; but he hunted about, and finding this poor nickel he laid it on the plate to aid the church militant in its fight against the world, the flesh and the devil. His silk hat was beneath the seat, and his gloves and cane were beside it, and the nickel was on the plate – a whole nickel. On Saturday afternoon he had a gin rickey at the “Queen’s,” and his friend had a fancy drink, while the cash register stamped thirty-five cents on the slip the boy presented to him. Peeling off a bill, he handed it to the lad, and gave him a nickel tip when he brought back the change. A nickel for the Lord and a nickel for the waiter! And the man had his shoes polished on Saturday afternoon and handed out a dime without a murmur. He had a shave and paid fifteen cents with equal alacrity. He took a box of candies home to his wife and paid forty cents for them, and the box was tied with a dainty bit of ribbon. Yes, but he also gave a nickel to the Lord. Who is the Lord? Who is He? Why the man worships Him as Creator of the universe, the One who puts the stars in order, and by whose immutable decree the heavens stand. Yes, he does, and he dropped a nickel in to support the Church militant. And the man knew that he was but an atom in space, and he knew that the Almighty was without limitations, and knowing this, he put his hand in his pocket and picked out a nickel and gave it to the Lord. And the Lord being gracious and slow to anger, and knowing our frame, did not slay the man for the meanness of his offering, but gives him this his daily bread. But the nickel was ashamed, if the man wasn’t. The nickel hid beneath a quarter that was given by a poor woman who washes for a living.”

Merry Christmas to All! 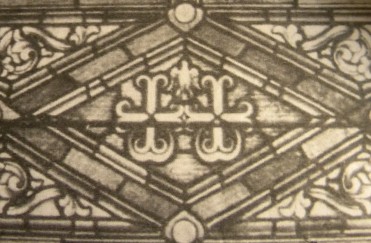 The builders of St. Francis de Sales Church left many messages for the faithful to decipher, but the symbols in the bottom part of the Nativity window (middle long window, St. Joseph side of church), are especially hard to puzzle out, since they were imperfectly formed in the glass.

Historic photos from the D’Ascenzo Archives at the Athenaeum are only a little sharper, but those seem to show the two lily-like decorations as anchors with crossbars, or anchor crosses. The blob between the crosses is a bird with long pointed wings and a forked tail — a swallow – a traditional complement to the Nativity scene above, and part of a unifying theme for the three bottom windows.

Swallows were mysterious birds because they disappeared in winter: until the early 1800s, it was believed that they hibernated, or slept, in mud at the bottom of ponds, and “returned to life” in the spring. Because of this annual  “resurrection,”  the swallow was used in art to represent the incarnation – the dual status of Christ as both divine and human.

(Incidentally, it was Edward Jenner, an English country doctor and naturalist, who marked individual birds, observed their behavior, and determined that they actually flew south in the winter and returned in the spring. Jenner is an interesting character, more famously credited with the invention of vaccination against smallpox).

The anchor crosses on either side of the swallow also fit nicely with the Nativity theme, since they are supposed to signify “hope” – and what could be more hopeful than the birth of the Savior! Why are they paired? All three bottom windows on that side of the church show variations of a double-cross (two crosses together, not a weasely form of cheating) – more emblems of Christ’s combined human and divine nature.

What’s the Santa secret? The anchor cross is an interesting cross choice for the Christmas window, since the anchor can also be a symbol for Saint Nicholas – the saint who inspired Santa Claus! His most famous legend relates to tossing bags of gold through a window to provide a dowry for young ladies. But he is also the patron saint of sailors and ships, since his prayers were thought to have calmed a fierce storm at sea as he returned by ship from a pilgrimage to the Holy Land.

So we are illuminated by our windows. We realize that like Saint Nicholas, we are on a pilgrimage through life, inspired by a divine mystery. The muddiness of the hand-crafted symbols in our glass offers an extra layer of meaning: reminding us of human imperfection, and our tendency to obscure the message of Hope that the season should represent.