The wooden doors of the old confessionals at the back of our church were carved with a window box of botanical symbolism to inspire those waiting for the sacrament. 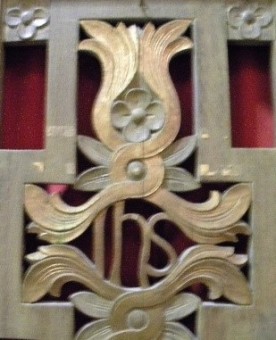 In the center panel of the center door, the distinctive long tubular flowers of hyssop surround an IHS (first three letters of IHSOUS, or Jesus in Greek) monogram. Historically, the bitter herb was used in ancient Jewish purification rituals and at Passover. A woody shrub, it is the symbol of penitence.

The other flowers in that IHS panel — with four chubby, rounded, slightly notched  petals — appear to be dogwood. Four petals symbolize the cross and the crucifixion. Dogwood can also mean regret for sins (and, perhaps, in the modern era, one might find an added dimension of reflection on diversity and change, since dogwood growers have developed hybrids, combining characteristics from multiple varieties,  in an effort to preserve American trees against devastating fungus blight).

In the bottom panel of the middle door,  gentian is a characteristically-shaped four- or five-petal  flower, often bright blue in color. It is said to have been named for King Gentius of ancient Illyria on the Balkan Peninsula, who is thought to have discovered its laxative medicinal properties. It is a symbol of penance and mortification.

The cutouts, or empty spaces in the same panel are in the shape of thistles. Thistles symbolize cause of sin so their absence suggests that the cleansing quality of the gentian is effective!

The wreaths in the bottom panels of the two side doors are a little ambiguous. They could be acanthus, which would symbolize expulsion from Eden and a  fall from grace. They could also be laurel wreaths, symbolizing victory over temptation. The berry at the center of each panel is more characteristic of laurel, but perhaps how you interpret them depends on your state of mind!

The “Language of Flowers” was a popular notion in Victorian times, when friends and lovers were supposed to have sent secret coded love messages to each other using little bouquets of carefully-chosen symbolic flowers (not so secret, actually, since the symbols were pretty well understood by everyone at that time). In fact, floral symbolism has long roots, going back through history across cultures. The Bible is full of plant symbolism (faith like a mustard seed).  Also our patron Saint Francis de Sales once referred to Christians as “living plants of the church”!

What’s the difference between a bishop’s chair and a throne, and which one is in our Saint Francis de Sales Church sanctuary?

Theologically, every active Catholic diocese or archdiocese has only one Diocesan Bishop, one cathedral, and one cathedra or throne. According to Denis McNamara, Associate Director at the Liturgical Institute of the University of Saint Mary of the Lake/Mundelein Seminary – and expert on ecclesiastical furniture — “the cathedra is really a theological concept (seat of authority for a diocese) that gets externalized (cathedra).” Like the throne of a monarch, it’s a physical object that represents an idea. The cathedral is the church that houses the cathedra.

Our chair is not the Philadelphia archdiocesan cathedra. So what is it?

At consecration, each new bishop is appointed to his own unique diocese. All three of our long-ago bishops (Bishop Crane, Bishop Lamb, Bishop McShea) were titular bishops, which means each received the title to an inactive ancient diocese without associated duties, territory, cathedral, or throne. He could then assist in the Philadelphia Archdiocese but was not, by technicality, a local bishop.

But all bishops — even those holding title to obsolete districts — still need to sit down from time to time! McNamara remarks that “you often see chairs with a bishop’s coats of arms on them…in his office or home… (they were very fond of doing this in the 1920s). But that did not replace the one cathedra in the diocese.” He further notes that “Cardinal Mundelein’s dining room chair here on campus has his coat of arms on it. And it’s just where he ate dinner!”

Our mystery chair bears the insignia of Bishop Crane, our second pastor, who became Titular Bishop of Curium (ancient Cyprus) in 1921. Its crosses and scrollwork  match the ornamentation of our church, and a scallop-shell design on the front, just below the seat cushion, resembles decorations in the original parish Baptistry (today’s Adoration Chapel). This decoration suggests  a possible purpose, recalling that ancient European baptistries were sometimes furnished with a special chair to be used by a bishop administering the sacrament of Confirmation.

Our church is just one of several bishop-associated churches in Philadelphia. Before coming to Saint Francis de Sales in 1903, our Reverend Crane was assistant priest to Bishop Prendergast at St. Malachy. Bishop McCormick became Bishop while at St. Stephen’s in 1947 – our then pastor Bishop Lamb attended the consecration. Bishop Gerald McDevitt served at St. Alice in Upper Darby from 1962, and subsequent bishops have found their homes at various suburban churches.

Historical context: it makes a difference!