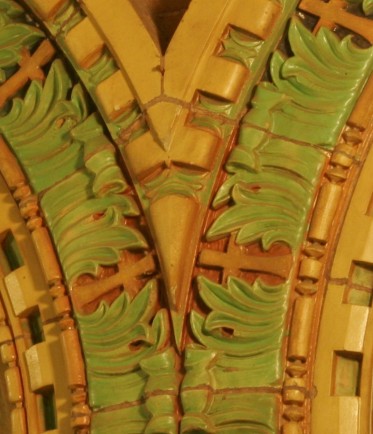 Some of the most decorative elements in our church are made of the humblest material. Look up at the sculpted details outlining the arches and walls, and around the windows. All of the colorful green and yellow decoration in our church is made of “terracotta,” which means “baked earth” clay.

In the early 1900s, terracotta was the fashionable material for the exterior decoration of metal skyscrapers. It was easy to mould; it was relatively lightweight; weatherproof; and, most importantly, having survived the heat of a kiln in its manufacture, it was considered fireproof.

The Atlantic Terracotta Company was formed in Perth Amboy New Jersey in the mid 1800s, and, for a time, was the biggest manufacturer of terracotta tile in the world. Headquartered later in Atlanta, it kept offices and manufacturing facilities in New Jersey, where the local clay, dug out of the ground,  was perfect for the tilework that would cover the steel skeletons of many of the important skyscrapers in New York City, as well as buildings in Philadelphia and elsewhere — even Japan. Some notable structures that used Atlantic Terracotta included the Flat Iron Building and the Woolworth Building in New York; the United States Supreme Court in Washington DC; and, locally, the Philadelphia Museum of Art.

Terracotta was popular, in part, because it could take any pattern or shape. Craftsmen made clay sculptures, from which were created plaster moulds. Clay slabs, pressed into the moulds, could then be removed, dried, decorated with glaze, and fired in a kiln. Finishes could look like clay or imitate marble, limestone, or granite. The green and yellow glazes were particularly popular.

Most terracotta was used on building exteriors, but an article in The Brickbuilder, in 1911, reported that:

“An interesting example of interior decoration is the St. Francis de Sales Church in Philadelphia, Henry D. Dagit, architect. The style is an adapted combination of the Byzantine and Romanesque. The colors are very brilliant but in the mellow light of the stained glass windows the tone is softened and the result restful.”

So, should you feel “restful” during the sermon, you may now blame the terracotta.