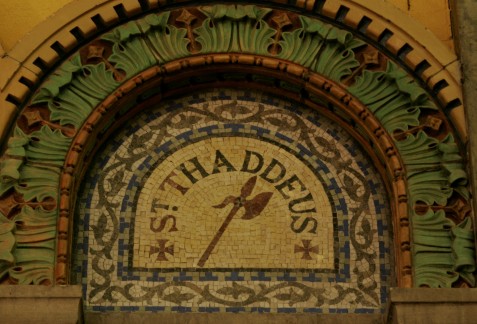 Saint Thaddeus, near the parking lot door, is actually a surname or nickname: the saint’s real name was Judas. Not Judas Iscariot who betrayed Jesus. Other Judas! So as not to confuse folks, the “good” Judas was called Thaddeus in the old Latin Rite. Today, he is generally known as St. Jude or St. Jude Thaddeus in the Roman Catholic church, and Saint Thaddeus in the Orthodox churches.

You may recognize St. Jude as the Patron of Lost Causes, invoked for impossible tasks. One of his letters, reproduced in the New Testament, exhorted the faithful to persevere and hold fast to their belief in times of trouble – showing his connection with desperate times and circumstances. Pilgrims who visited his shrine at the Vatican reported many intercessions, and Saint Bernard and Saint Brigid of Sweden are both said to have had visions asking them to accept St. Jude as the patron of extreme situations.

Some suggest that the saint was neglected for many years, due to his unfortunate name, and that may also have contributed to his identification with lost causes. Dedication to Saint Jude is a fairly modern phenomenon in this country: a national shrine in Baltimore, run by the Pallottines, began devotions in 1917; and one in Chicago, run by the Claretians, began in 1929. Both dates are long after our church was built.

Our 1940 Anniversary Book describes our mosaic as showing a “lance as his emblem,” “to remind us of the instrument by which he suffered martyrdom.” St. Jude Thaddeus is thought to have been martyred in Armenia, Persia, or Syria, and little is known about how he died. His symbol is more usually a club or a halberd — a long-handled axe — looking a lot like the object in our mosaic. There is a lance connection, though: in the Armenian Orthodox Church, the saint was said to have brought a sacred relic —  an ancient lance supposed to have pierced the side of Jesus on the cross — with him to Armenia, where it remains in a museum today (The Vatican also claims an ancient lance).

Speaking of things lost and found:  look up Saint Jude on Wikipedia, and you’ll see our mosaic inscription for St. Thaddeus, down at the bottom of the page!